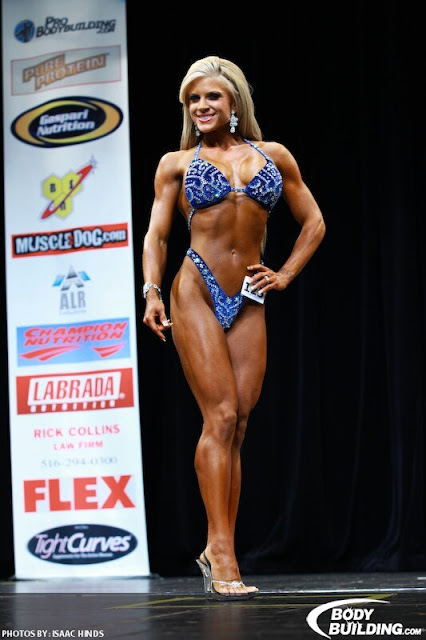 Monica Mark-Escalente has been someone who many people (including yours truly) viewed as a future IFBB Figure Pro ever since she won the 2007 Ironman Figure overall title. She would go on to compete 5 more times prior to her breakout year in 2009. She placed in the top ten in each competition she was in during her time in the NPC.

In 2009, she would redefined her physique for a somewhat softer look than what she had the last couple of years. The changes worked, as she won not only her class but the overall title at the 2009 Team Universe, thus earning her pro card and a chance to compete with the biggest names in figure, including her idol, Monica Brant. She will get her chance to show the world what she's capable of at the 2010 Figure International at the 2010 Arnold Sports Festival. Monica can correct me if I'm wrong on this, but I've heard throut the grapevile that this figure competitor is one strong female. I think I read on one website that she can carry around 120lb dumbells (I'm not kidding). Strong yet beautiful...what more can you ask for?! With her impressive resume in the NPC, expect Mrs. Escalente to make a "Mark" in the IFBB Figure division.
Posted by C-Ray at 7:53 PM

I totally agree with you again, C-Ray. I also saw Monica Mark-Escalante for the first time at the 2007 Ironman Pro and thought that once she became a pro that she would make some noise there. And I believe she will. It's only a matter of time.