There are some people that come around once in a lifetime. Those people that no matter what, you take one look at them and go..."WOW...This person is going places". That is pretty much the vibe many are getting at when they look at WWE Superstar Mandy Rose. Her wrestling career hasn't been the longest by any means, but thus far there has been no indication of why she should NOT be one of WWE's biggest Superstars going forward.

Real name Amanda Saccomanno, Mandy was born and raised in an Italian-American family in Westchester County, New York, and is the youngest of four children. She is of Italian and Irish heritage. For her education, she attended Yorktown High School, where she participated in dance. She felt that dancing was what she would end up doing professionally down the line. She ended up joining the Yorktown High School Dance Team and pretty much killed it as one of their top dancers. But over time, she felt dancing wasn't her true calling after all and decided into looking into fitness modeling instead. She later earned her bachelor's degree at Iona College, where she major in speech pathology, as well as beginning to take her fitness and physique much more seriously now. It got to the point where modeling agencies were beginning to notice her.

Once she was done with college, she decided to focus on fitness competitions, as she felt that (rather than dancing) would be the key to a successful career. To say fitness was definitely the right call for her would be an understatement. In 2013, she would enter the World Bodybuilding Fitness and Fashion (WBFF) Boston show and won it, to the surprise of many. After that, she took some time off to make up her mind on whether she was truly going to continue her fitness competition path. She ended up doing that and would go on to compete in the 2014 WBFF World Championships in the Pro Diva Bikini division and took top honors. That win would draw the attention of more people.

Even after being a World Bikini Champion, Mandy felt like she could do more with her career and discovered wrestling and decided to give that a try. She would enter the revived WWE Tough Enough competition (under her real name, of course and came in at a billed 120 pounds...this will become important later on in this blog piece) and gained a good deal of publicity on the matter. Not all of it was good, though. While she would meet her current bestie Daria (now known as Sonya Deville) on the show, she rubbed a good deal of people the wrong way, intentionally and unintentionally. Her progression was threatened by a near-quick exit from the show until the Miz pulled out her save card and she was spared from an early elimination (Thanks Miz!) from the show. She ended up making it all the way to the finals where she lost to Sara Lee, who won the contract and the money, yet never appeared on WWE TV after Tough Enough, which ended up being another case of losing making you a bigger winner down the line...which is exactly what happened to Mandy once Tough Enough was done.

WWE liked her look a lot and decided to bring her on for one season of Total Divas. After that, she joined the Performance Center and made a couple of NXT TV appearances, most noticeably a mini-feud (if you want to call it that) with Ember Moon. That match made quite a bit of people open their eyes and go "Okay, she might be more than looks after all!" She would show that through various NXT live events, gaining somewhat of a cult following, do to being a photographer's dream and the shock of fans when they realize just how strong Mandy really is, hence the formation of "The Golden Goddess"

People were beginning to wonder whether she would make a full-on NXT run or move right up to the main roster. After what seemed like forever, we finally got our answer the night after Survivor Series 2017. Raw had a Fatal 4-Way match to determine who would be next in line to face Alexa Bliss for the Raw Women's Championship and during the match, Paige made her shocking return to WWE, and she didn't come alone. Mandy (and her bestie Sonya) arrived and (with Paige) unleashed hell on practically every woman in WWE for weeks. Named Absoultion, they took down nearly everyone who stood in their way, until an unfortunate accident at a Raw live event injured Paige to the point that she will never be able to compete in the ring again. This put Absoultion in disarray, and there was uncertainy for both ladies, even though they got to make history during their time in Absoultion, entering the 1st-ever Women's Royal Rumble, Women's Elimination Chamber, and Wrestlemania Women's Battle Royal. Mandy and Sonya were both drafted to Smackdown Live, where Paige now runs things as General Manager. She made it clear the first night Mandy and Sonya appeared on Smackdown Live that Absoultion was dead and neither woman would get special treatment from her. And while we are unaware of how WWE views Sonya for the long run, it seems WWE has seemingly made it clear that they see something special in Mandy Rose, as on the May 8th edition of Smackdown Live, she entered her Smackdown debut match against Becky Lynch (1st-ever Smackdown Women's Champion) with a new entrance (complete with blurry effect) and new music and won a quick yet decent match against the Lass Kicker. She has been dubbed "God's Greatest Creation" since Ember Moon (War Goddess) and Alexa Bliss (The Goddess of WWE) have already claimed the Goddess titles. 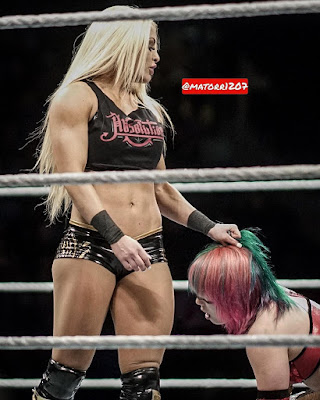 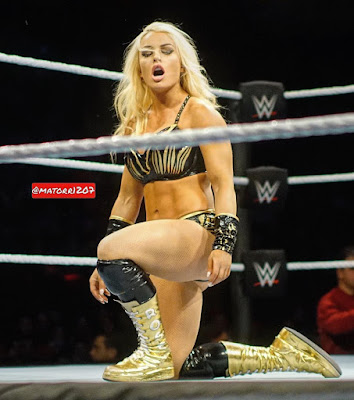 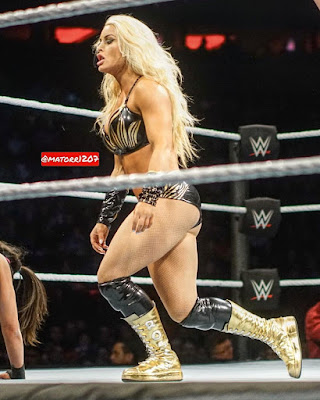 During her time in WWE, from NXT to now, she has put on an good amount of muscle on her, to the tune of 20 POUNDS. For someone that's only 5 foot 4, that's a lot. To put this in perceptive, if Mandy were to compete in the National Physique Committee (NPC) as a female bodybuilder, she would BARELY be able to compete in the light-heavyweight division. She revealed her weight in her Instagram story. But then again, when you can leg press over 500 pounds and deadlift over 400 pounds, you can't be a small chick. In the first-ever WWE PC Combine, she placed 3rd among the women, with only Bianca Belair and Ember Moon besting her. Her muscle size, strength, and overall beauty to us makes her the best COMBINATION of muscle and beauty since Trish Stratus in her prime, and even in her prime Trish didn't even have nearly the power nor the size Mandy currently has (Trish was 120 at her heaviest), and we can only see Mandy getting stronger going forward. We say combination because there are those that are definitely stronger than Mandy but maybe not as beautiful, those more beautiful than Mandy but not as strong, and those that are definitely more jacked/toned than Mandy but might lack the beauty and/or strength. 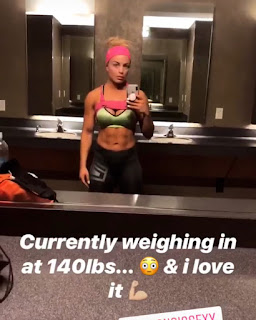 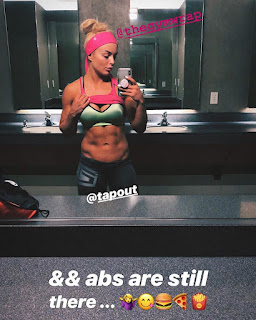 When you look at her past in high school, college, the WBFF, and wrestling, Mandy really is unlike any blonde that has come in WWE in a while. A college degree, a background in dancing, a former world fitness bikini champion, lifting PRs that would put even some of the strongest MEN to shame, and constantly learning in the ring with each match...Mandy has everything it takes to succeed in WWE and be one of the company's top stars for quite some time. When it's all said and done, we don't think she will be known as the second coming of anyone. She will be the first (and ONLY) Mandy Rose.

Credit to Greatest Physiques (https://www.greatestphysiques.com/amanda-saccommano/) for some of the content used in this blog piece.

Posted by C-Ray at 1:25 AM No comments: Links to this post