Around the early days of women's figure, you might recognize the name Christine Pomponio-Pate. She competed in the IFBB Figure division for three years, from 2004 to 2006, winning a couple of figure titles, placing in the top six at both the Arnold and Olympia every time she competed in those events, and gain the respect and admiration of many, including yours truly. She gave birth to her first child, Riley, around Christmas of 2007. She took all her baby weight (which was MUCH less that most), within months, and these days, she looks like she could step on stage again anytime she pleases.

There's no telling if she will eve return to the IFBB stage, but there's one major thing she's now a part of, and something very few competitors can claim. She's now part-owner of a publishing company called Milverstead Publishing. She's going to be publishing a couple of books in the near future. One of then will be an autobiography, and the other will be a book about fitness. To say that I'm extremely happy for Christine would be an understatement. From all of us at FitGems Nation, we are very proud of you, Christine! KEEP UP THE GOOD WORK!! :)

For more on her latest venture, click here to view Hollywood Weekly (with new photos of the new publishing co-owner) and here to view a blog written by Christopher Finlan, the president of Milverstead Publishing. 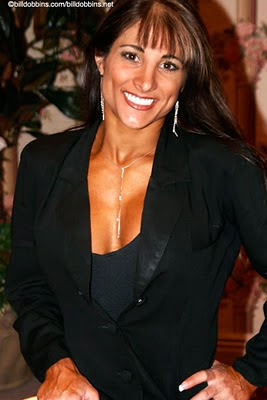 Christine P-P can now add co-owner and author to her incredible accomplishments
Photo courtesy of Bill Dobbins (from Olympia 2005)
Posted by C-Ray at 5:07 PM