2010 Ms. International Results (Iris In a Class of Her Own: Everyone Else Fighting for Runner-Up) 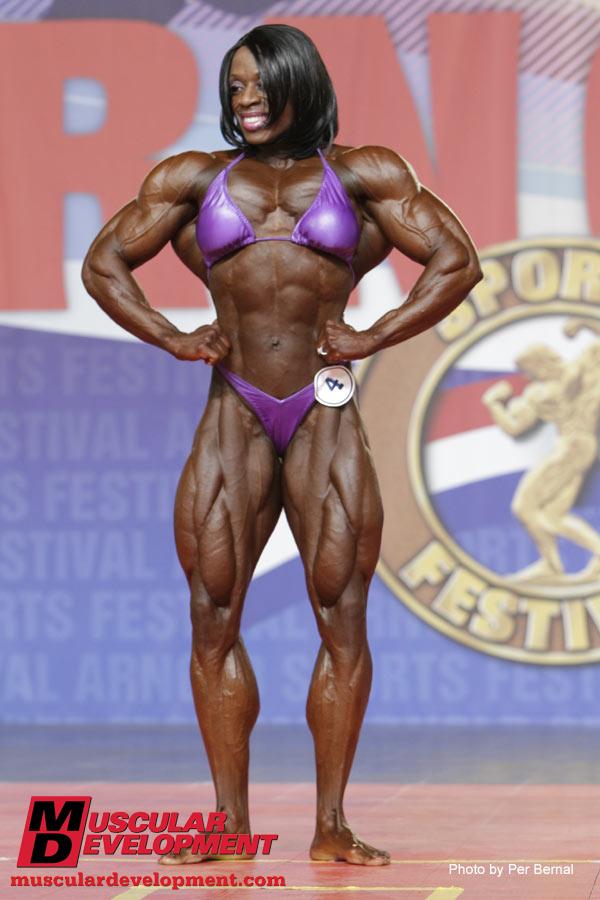 Let's be completely honest here, everyone that was fighting for the Ms. International title was fighting to see who would end up being the runner-up...well, that was the case the minute Iris Kyle stepped on stage during prejudging. This woman seems to have absoultely no weaknesses when it comes to her conditioning, which is second to none in the business. She could seriously give some of the male bodybuilders a run for their money in terms of conditioning. She's that good. With this win, she now has the record for most Ms. International titles with five. Don't be surprised if she topples her own record next year with a sixth title.

Yaxeni Oriquen, another multi-time Ms. International Champion, took runner-up honors. She was smaller than she's been in previous competitions, but still looked great nethertheless. Apparently it seems like Yaxeni has taken Dayana's spot as Iris's biggest competition. We will see what happend when they clash again at the Olympia later on this year.

Third place went to Debi Laszewski. Debi has been coming into her own as of late, as last year she was the Ms. International Runner-Up, and 3rd Place at the Olympia last year as well, her highest placing to date at that contest. If she keeps this up, then she just might...JUST MIGHT..be able to challenge Yaxeni and Iris for female bodybuilding's top honors.

Lisa Aukland took fourth place, keeping her top 5 streak in tact for what has gone on for quite some time. She's always a major threat heading into a major contest, and almost a surefire bet in a open contest.

Betty Parsio continues her own personal streak by placing fifth. I was told that she was the most vascular of the bunch. Much like Lisa, she's a serious threat wherever she goes. As she gets older, she seems to get better in every competition she's in...and she's been in quite a bit of competitions.

Rounding out the top 6 was Dayana Cadeau. While she no longer seems like the thorn to Iris's side as far as championship threat is concerned, Dayana can still go with the best of them, and is among the most elegant of any female bodybuilder our there today. This might be a pet peeve of mine, but I don't think it would hurt for Dayana to smile just a little bit more. That's just me though.

All six ladies will get the chance to showcase their stuff again in September, as they qualified for the 2010 Ms. Olympia.

Rest of the Best:
Zoa Linsey made a great Arnold debut, placing 7th. I was told that Zoa was one of the coolest people to be around at the entire Arnold. Zoa strikes me as someone who's humble and doesn't let success get to her head. That kind of attitude will take her far in life. :) Alina Popa made her Arnold debut as well, and placed 8th. More fine-tuning and she could go places as well. Elena Shportun, last year's Arnold Amateur Women's Bodybuilding champion placed in a respectable 9th place, while Brenda Raganot rounded out the top 10. Antoinette Thompson, Jeannie Paparone, Dena Westerfield, and Mah Ann Mendoza rounded out the Ms. International field.

Do you agree or disagree with the placings? Share your thoughts on the comments below.
Posted by C-Ray at 8:49 AM