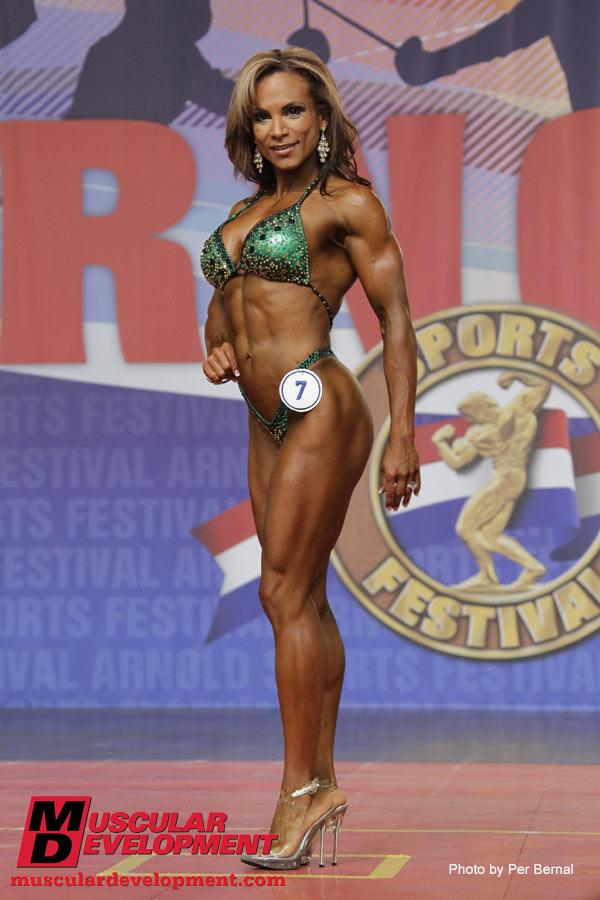 This was a pretty historic Fitness International contest, as this was the first Arnold that the new fitness judging was applied to, with two rounds instead of four. For those that don't remember, it was the one-piece and 45-sec mandatory routines that were taken away, and only the two-piece and 2-minute routines remain. You could have added or taken away 100 new rounds, but it was a foregone conclusion who was going to win the Fitness International. When the smoke cleared, it was none other than Miss Chica herself, Adela Garcia, standing tall and claiming another Fitness International title. Nice routine and great physique...what more can you ask for? :)

In her homestate of Ohio, Julie Palmer once again claimed the runner-up title, but not before a wee bit of controversy. According to the judges, she had a 2nd-place worthy physique, but a 4th-place worthy routine. She definitely has a nice physique, but I've seen better routines from Julie. Not that the routine she had was bad by any stretch of the imagination...I've seen her do better, that's all.

The one person that many people said got screwed this weekend was Tanji Johnson. Her routine was the 2nd best of the bunch, and one of the big crowd-pleasers. One would have to wonder if a certain King of Pop (May God rest his soul) had anything to do with it. :-) But her physique (according to the judges) was 5th place?!?! Uhh...don't agree on this one. I personally thought she looked nearly on par with her look as last year's Olympia. I would have had her 2nd or 3rd easy for the physique round.

Words can't express how happy I am to see Trish Warren placed where she did this weekend. She was 4th place after a shockingly disappointed showing at last year's Olympia. We saw a new Black Mamba. She was lean, but obviously smaller than last year, which helped her in the physique round, as only Adela and Julie were better than her there. Some people were upset that she had to lose a good deal of muscle to get to this point, but if you saw what she went thought (Go to Muscular Development and view her videos leading up to the Arnold), she didn't slack up on training. She went balls to the wall, and it paid off. Congrats to the Black Mamba on her best placing in a big show yet.

Oksana Grishina is back in the Olympia after a great routine and killer physique she displayed at this year's Arnold. She basically fine-tuned her overall package from the Phoenix Pro, where she competed two weeks ago, and it worked. Some say that she should have been a bit higher than 5th, though.

Camala Rodriquez continues to impress the fitness world, as she rounded out the top 6 in her Arnold debut. Nice routine (Oh yeah, SHE also had a Michael Jackson-inspired routine) and a tight physique, not to mention her Latin flavor, has made Camala quite a favorite in her rookie year. Look for her to be a serious threat in the Olympia later on this year.

The top six will get their chance to showcase their talents at the Granddaddy of Them All in September as these six qualify for the 2010 Fitness Olympia.

Rest of the Best:
Tina Durkin had one of my personal favorite physiques, and could have easily been in the top 6, but she was a few points shy of that mark and was 7th, but she qualified for this year's Olympia after her showing from last year's O.  Myriam Capes made her Arnold debut and looked stunning as well, but her routine apparently wasn't up to par with the others above her. No doubt she will make some adjustments for the Olympia. Regiane DaSilva tied with Myriam for 8th place with a good routine and a nice physique, almost too lean...ALMOST. Nicole Duncan, with a cool new hairdo, rounded out the top 10. Arnold Rookies Bethany Wagner, Kizzy Vaines, Sylvia Tremblay (last year's Arnold Amateur Fitness Champion), Kayde Puckett and Allison Ethier (2008 Arnold Amateur Fitness Champion) rounded out the fitness field.

Do you agree or disagree with the placings? Share your thoughts on the comments below.
Posted by C-Ray at 9:59 AM