Well, as announced on Diva Dirt today, the wrestling name for IFBB Figure Pro Zivile Raudoniene will be Aksana, at least that's what it will be for her in Flordia Championship Wrestling (FCW), which is World Wrestling Entertainment (WWE)'s developmental territory. I prefer this name than her previous name, Olga. That screamed EPIC FAIL!! But I can definitely live with Aksana. 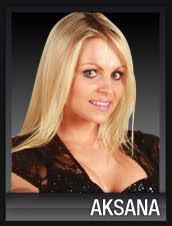 From what I've gathered, she's supposed to make her FCW debut sometime next month. There are a few pics out from the taping right now, but since the show hasn't aired yet, I won't actually post a pic from the tapings. I can though give you the link to some pics I found of her FCW debut if you click here for them. I think she looks great, and if you were to have told me a few months ago that the current IFBB Figure International champion would be heading to the biggest sports-entertainment company on Earth (WWE), I would have though you were crazy. But now, it seems like Zivile is well on her way to being a television star.

I'm pulling for Aksana to do well in FCW and eventually WWE. I hope she follows the paths of other fitness stars such as Trish Stratus, Torrie Wilson, and Lisa Maria Varon (Victoria in WWE, currently Tara in TNA) and become a big star in wrestling.

Hey C-Ray,
I know you used to follow or were listed as a follwer of my blog on blogger - not sure if you do anymore (you never leave comments LOL) but just wanted to to point you toward the most recent post where I mention the sponsorship.
http://rebeccastaggs.blogspot.com/2009/11/lazy-day-updates.html Some of it ended up being copy and pasted from my blog entry on your site too - but some is differnt. :) Hope you are having a fabulous Sunday.
GO BEARS! :P

Yep, I still follow your blog. Thanks for the tip. I need to leave comments on your blog. I apologize for that. Life of a grad assistant. LOL.